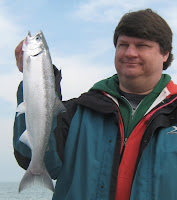 Boat maintenance done. Some of my family duties (daughter moving) finished. Weatherman finally pre-cognized a great day, I rounded up a couple of friends and we hit Lake Michigan aboard the Brother Nature for the shake-down cruise. Though I’ve done it a couple times, I don’t like heading to the lake with "paying" customers for the first trip of the year. Ya just never know for sure.

But the Brother Nature fired right up with some fresh $3.60 gasoline. It didn’t seem to leak, the boat went backwards with the gear lever in reverse and forward once we were away from the dock at the East Chicago Marina.

Reports had cohos right outside the marina so why leave fish to go find other fish? Side planers were deployed, lures deployed and with only 4 or 5 rods set in our 9-rod array, the first salmon of the year struck, was skillfully played and soon entombed in the fish well. Then another and another and it seemed as though we were in for a quick limit.

So Greg decided to shake one of the smaller cohos hoping to replace it later with one a few inches larger. Then Tom misjudged his fish tossing skills and banked a coho he’d caught off the live well lid and back to the lake. No matter we thought, only to realize we’d abused our standing with the fish god (or lady luck) after a 2 hour dry spell.

The skies brightened and put the fish back in the mood and soon we were at or close to our 15 fish limit. Greg performed the count, by pulling each fish from the well tallying 15. But as he was stowing the load, the last fish caught, only a minute or two from the lake gave a tricky flip and it too suddenly found itself back home in the lake. We were back to needing one more fish. 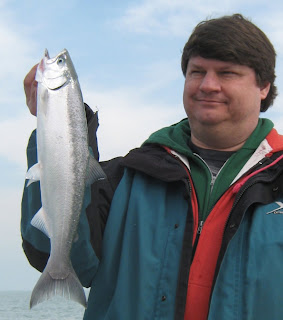 Tom with our final 15th coho.

I started the fish cleaning and had all 14 fillets cut and bagged. Tom handled the clean up chores, washing down the deck of the coho blood and the final fish hit a Red Arty.

It’s game on! And I’m looking forward to a great season.....

Posted by Captain Mike at 7:16 AM No comments: 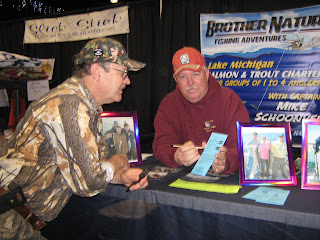 Posted by Captain Mike at 6:07 AM No comments: