My cell phone rang as I sat waiting for my customers to show. "We are parked by the yacht club."

"Okay," I reply, I'm in the boat down at the boat ramps. Head back for the marina entrance and you'll find me. You can walk or drive down here and park. It’s not far.”

Ten minutes later, still no customers. (It’s only a 100 yards or so.) So I hit the “dial the last number” buttons on my cell phone and ask the guy if he’s gotten lost.
After a short pause, he said, “I’m on your boat.”
“There’s no one on my boat but me,” I told him after a quick check.  The Brother Nature isn’t that big and it’s impossible to hide on it, but I checked anyway.

Then the customer said, “Oh, we’re on the wrong boat!”

I looked over to the D - Dock where I’d seen Capt. Mike Evano loading his customers a few minutes earlier.  Captain Evano looked over at me and waved.

Evidently, my group came walking along asking for Captain Mike and they were Shanghaied aboard Lakeside Charters.

Once we got all the people on the right boats (the Lakeside customers showed up a few minutes later), we headed out for a frustrating day, losing as many salmon as we boated. Still, a fat brown trout ended up being the big fish for the day and there were plenty of coho filets in the ziplocks as they headed for home. (If they can find it.)
Posted by Captain Mike at 4:28 AM No comments:

I gave up smoking 30-some  years ago but I’ll admit that before I did, I often tossed my cigarette butts into the lake when I was fishing. I didn’t consider myself a litterbug and would never have tossed empty bottles or cans overboard, plastic bags or any other “non-biodegradable” refuse. But butts were small, and I thought the remnants of the filtered Marlboros I smoked were made from a biodegradable packing that would “go away” in a short time.

Maybe that was true back in the 1980s, but now most cigarette filters are made from cellulose acetate, an early form of plastic still used in eyeglass frames and the textile industry. Cellulose acetate can last for decades in the environment.

The idea to write this blog came from a news release from the BoatUS Foundation announcing a continuation and expansion of their 2011 Cigarette Litter Prevention program which provided permanent and portable ashtrays at participating marinas.  http://www.BoatUS.com/foundationcigarettesurvey
The project proved successful in making it easier for smokers to snub out their smokes properly, rather than pitching the butts overboard or squashing them on the docks.

I think the Cigarette Litter Prevention program is great. I also think that most smokers, if they understood their cellulose acetate filters are more than just a temporary bit of litter, can police themselves.

So if you are a smoker and a boater, use an ashtray and dispose of your butts just as you would any other kind of trash. The money from the BoatUS Foundation can then be used to fund solutions to problems you didn’t cause.

Though I don’t smoke and wish everyone would quit smoking, I view the issue as a personal choice. The Brother Nature is an open boat so while on board, smoke ‘em if you’ve got ‘em. I don’t carry matches and haven’t got a cigarette lighter. And don’t toss the butts overboard.

Posted by Captain Mike at 6:41 AM No comments:


Every hunter or fisherman loves “opening day.” Fish and game management agencies use open and closed harvesting seasons as one of the tools to achieve their conservation goals. Hunters and anglers know that often, the first day of an open season usually comes with the best chance of success. There is more of what we are trying to harvest available and the fish or game has not been educated by near misses, whether that’s hooks or bullets.

In Indiana, there are no open or closed fishing seasons, so the hook and line crowd need only go when they think the time is right. Still, the first outing in the spring is very much like an opening day. Yours could be tomorrow, mine was yesterday. The same principles are in affect, whether the “opener” is a legal date or just a first opportunity.

Opening day anticipation is much more than just a better-than-average chance for success. Seasons and opportunity are too fleeting. The rest of the year, an avid hunter, fisher or trapper has to relive their passion in memories or preparation for the next opener. And as that draws closer, the anticipation builds like a 6-year-old waiting for Christmas morning.

Opening day on the Brother Nature was yesterday and was well worth the wait and the anticipation. The morning coffee never tasted so hearty on the trip to the lake. The concerns of “did I forget something” added drama. The weather report was perfect, the boat's motor started on comand and soon, with the “new” season only minutes old, the first fish bit and was reeled to the net.

That was certainly not the only fish of the day. The fishing was terrific. “Like in the old days,” one old-timer told me.

Yeah, just like in the old days. Or perhaps just like in old memories of opening days past.
Posted by Captain Mike at 8:08 AM No comments:

It wasn’t long after buying the current Brother Nature I figured out that A) it’s poor planning to have a white floor in a fishing boat - especially one that is launched and fished adjacent to steel mills and other coal-burning industries and B) the carpeted floors in my previous boats could probably grow vegetables. In the end, I painted the floor of the boat and sold a story about it to Great Lakes Angler magazine.

That was over 10 years ago and the painted floor certainly showed its age. “Another thing to do on my summer’s things to do list,” I thought.


Long story short, (read about it in the May issue of Great Lakes Angler magazine), my boat now has a new floor. I didn’t paint it. It’s a floor material called “Safe-Floor.”

If you know what an artificial surfaced running track looks and feels like, it’s very close to that. The recycled tire rubber for each is the same - the bonding material for each is different. It has given the interior of the boat a face lift, but more importantly, the surface gives a better and more comfortable walking surface. For more information go to www.safe-floor.com.

Posted by Captain Mike at 7:53 AM No comments: 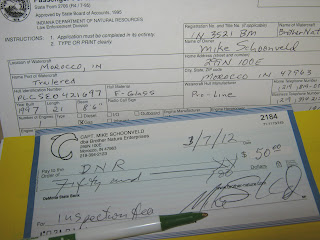 A recent Princeton University study showed that approximately one-third of all jobs in the USA currently need some sort of government permit, licensing or registration to perform. What a jobs killer!
Is that a good thing? You be the judge.
It could be argued that licensing medical doctors is necessary. (But why are there crummy doctors?) I don’t really care if my barber is licensed or not. If I get a chop-job from one guy, I’ll go to a different one next time.
Included in the category of “highly regulated jobs” is running a charter boat.
There’s the coast guard license, boat registrations, boat inspections, marina registrations, guide licenses - in Illinois one needs both a state charter captain’s license as well a passenger boat license.
Under the guise of “public safety” and “resource management” each of these licenses or registrations come with an administrative “fee” attached. (Administrative fee is a government word for TAX.) With the check shown in this picture I now have my “taxes” paid for 2012.
I hope my customers feel safer knowing I have current “stickers” on my boat instead 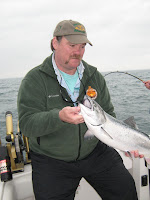 of those from last year or the year before. I hope those who jiggle the numbers when planning future management strategies for Lake Michigan be sure to incorporate the fish and customer counts I have to submit each month. I hope the government bureaucrats who are the recipients of the checks I write to be able to take people fishing each year spend my money wisely. I hope every day I spend on the lake this year features bright skies, light wind
s and hungry fish.
What do you think of my hopes coming true?
Posted by Captain Mike at 6:44 AM No comments: