The leader of the “A-TEAM” on the old TV show popularized the maxim, “I love it when a plan comes together.”  Who doesn’t?

I love it when the weatherman is right about favorable climatic conditions and waves on the lake are negligible. I love it when the fish have been biting well, stay in the same place and continue to bite the same lures. When that happens, it’s easy to make a plan and love it when it comes together.

But when dealing with wind, waves and weathermen (not to mention finicky fish) the first plan doesn’t always come together. Plan A can be a bust.

That’s why I always like to have a Plan B in my pocket when I’m out on Lake Michigan. I’ve been at it long enough to have a whole book of plans and the book of plans really paid off this week.

I had a group of guys from Kentucky on the schedule for Tuesday and Wednesday. It looked like they were going to hit it perfect, weather wise. Predicted rains were to end before dawn on Tuesday and a couple days of light winds were in the offing. Plan A was going to work!

Except, when we actually got out on the water we found “residual” waves from overnight storms and a bit more breeze than the weather-guessers had promised. Worse, the wind was one direction, the rolling waves another and boating was like in a pot of boiling water with lumps and bumps going every which way.

Plan B was needed. Though the hot bite area was nearly unfishable, I knew a spot a few miles away where industrial breakwalls would provide sheltered conditions and hopefully, enough fish to make it worthwhile.  I love it when Plan B comes together!  We caught several salmon, not limits, but enough to keep everyone happy and the first steelhead of the year was captured.

On Wednesday, I knew I needed to produce something spectacular for the Kentuckians. Though it’s still early season, I took advantage of the near glass-like conditions of the lake to motor offshore to an area I knew would be teaming with lake trout in a few weeks. Were there any there now?

You bet! And even with the increase from 2 per day to a 3 trout bag limit, the KY anglers had no problems - other than sore shoulders from the trout work-out they were given. Our plan of easy fishing nearshore for spring-sized cohos wasn’t missed in the least. Plan B did the job just fine.
Posted by Captain Mike at 6:14 AM No comments:

I hate to have to cancel a fishing trip due to weather. Worse, is trying to do it as far in advance as possible. Some captains won't make "the call" until the morning of the trip at their dock.

Fine, if everyone is local. But I don't want someone driving an hour or two in the dark; or even worse, to drive up the night before our schedule day on the lake, rent a room or two to accommodate the group and then be told, “Sorry Charlie” at the boat docks.

Sure, there are probably several days when the weather “guessers” get it wrong and the winds or rain or whatever trip-ender conditions are predicted don’t materialize and the trip is saved. I’m sure there are far more times when either the fishermen go home with wasted time and treasure.

Sure there are times when I get surprised and do call a trip off at the dock or as soon as I see the lake conditions up close and personally - not often. Maybe once or twice per season; some seasons zero times.

When I’m wrong, I’m bummed. My first sentence is worth repeating. I hate to have to cancel a fishing trip due to weather.

However bummed, I’m at least relieved when I check the radar the morning of the trip or monitor the wind/wave buoys afloat in the lake and find the predictions I believed well enough to cancel a trip are proving the forecast correct.

Why am I sitting here, blogging, instead of sitting in my boat helping a group of anglers experience the fun and excitement of Lake Michigan fishing?  Look at the weather radar screen-cap pictured here at about the time our adventure would have started.

As I told my customer last night when I was calling off the trip, “I don’t care if a person has a thousand dollar rain suit or a one dollar plastic poncho. By the time you’ve fished in a steady rain for a few hours, you’ll be wet and cold.z"

Posted by Captain Mike at 6:06 AM No comments:

APRIL 13, 2017
In the news the past couple days comes a report of a toxic chemical, hexavalent chromium, accidentally being spilled into one of the discharges at a steel processing plant along Burns Waterway, a.k.a. Burns Ditch. This is the river leading from Lake Michigan to the Portage Public Marina where I originate many of my Lake Michigan fishing trips.

WHAT I KNOW
1)   The steel company, fixed the leak and stopped the outflow as soon as possible. The company self-reported to authorities including the EPA, Coast Guard, IDEM and DNR.

2) The Portage Marina and boat traffic on the waterway was closed for a short time but both are now open, as normal.

3) The aerial photos of the mouth of the waterway is misleading. 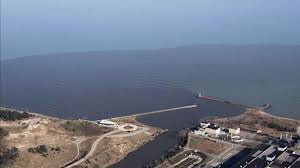 4) The EPA is the lead agency with other agencies helping where needed.

5) Drinking water intakes and nearby beaches are closed for precautionary reasons only and testing is on-going.

6) Hexavalent Chromium is bad stuff, made famous by the Erin Brokavich movie. The H.C. contamination in the movie was long-term exposure to people through drinking water contamination from long-term dumping by a power company. That doesn’t make this incident good. It does make the Portage incident different than the California incident.

WHAT ISN’T KNOWN
1) No one knows how much H.C. was spilled.  The broken pipe leaked contaminated water, not pure or concentrated H. Chromium, but how much went down the drain isn’t known.

2) Official reports are none of the stuff made it to Lake Michigan. Is this true? If it were certain, no need for #5 Known Fact.

Regardless of knowns and unknowns, let me say: THIS IS BAD. THE TOLERANCE FOR TOXINS ENTERING PUBLIC WATERS SHOULD BE ZERO.

So far what I’ve seen is a mix of real news, conjecture and fake news. I’ve not heard many facts not filtered through three or four sources.

FAKE NEWS - There have been substantial rains recently and there's a lot of silt in the water flowing down Burns Waterway from upstream. The ditch-water is brown, Lake Michigan is green/blue. Fly over in a copter or with a drone to take photos for your news show or newspaper and you see a big brown plume of water running out of the ditch into Lake Michigan.

On screen or in the photo it looks like there's a bajillion gallons of water, chemically tainted dark brown, flowing out into the lake. The look of this photo would be identical whether the spill had occurred or not. Similar photos can be taken at every tributary of Lake Michigan after storm run-off runs into the lake.

My best guess is if there are any affects, they will be localized and short-lived. I would imagine we'll get the "rest" of the story in the next few days or weeks and it won't be as glamorous as the drone-photo of the muddy water flowing out of Burns Ditch so it will be a page two filler article.

There are plenty of places to fish, completely unaffected.
Posted by Captain Mike at 8:14 AM No comments: