I could understand a ramp being built in a Lake Michigan marina “too short” in 1987 when the water level in the lake was at a modern day high level. The drought of 1988 solved the high water problems. None of the Chicago skyscrapers fell into the lake and Lake Shore Drive wasn’t flooded, as doomsayers had been predicting. However, the falling water levels continued into the 1990s when the Portage Public Marina was being designed.

So with water levels heading down, and no scientific consensus about what the future water level would be, why not engineer the boat ramps to include another few yards of concrete to ensure the ramp would be sufficiently long, regardless of significant water fluctuations? No answer, but by the end of the decade, receding water levels had rendered the ramp useless for most boats suitably-sized to be safe on Lake Michigan.

It was a two pronged problem. Most boats and trailers, these days, are designed so the boats can be driven onto the trailers. Nose the boat into position, apply a bit of throttle and the boat slides up onto the trailer supports. However, the prop wash caused by power loading on a too-short ramp dislodges the sand or silt at the end of the concrete resulting in a drop off. Imagine, backing your trailer in far enough that the trailer wheels drop into the hole at the end of the submerged concrete. In most cases, you are stuck and in many cases people were stuck.

A complete rebuild or well engineered retrofit would have been very expensive. So instead, a patch was made by hauling large rip-rap sized stones to the ramps and pushing them into the water to fill the hole at the end of the launch ramps. Signs were places warning boaters that power-loading was prohibited.

The launch ramps are open for use 24/7. The marina is staffed from 7 to 7 in-season; 8 to 4 early and late in the boating year. Even when it’s open, the launching and loading of boats is only loosely monitored. One doesn’t have to watch very long on a busy day to see boaters violating the power-loading prohibition.

Currently, the lake is as low as it was in 1987 (due to last summer’s drought and other factors) and only an inch or two shy of the historic record low level reached in 1964. With the water level down, tons of softball to soccer ball sized stones shoring up the ill-designed terminus of the ramp and plenty of power-loaders unknowingly causing damage, my propellor became a casualty.

I was at the marina one day in mid-summer when additional rip-rap was pushed into the hole at the end of the ramp. In retrospect, I should have guessed what was happening. With the lake level down, even the large rocks were being “blown” out of position as high-powered boats were goosed onto their trailers. Where did those displaced rocks go?

They formed an artificial reef to the rear of the hole and when I lowered my propellor into the water and backed away from the ramp, it impacted on the displaced rocks. Pictured is the result. This damage is from a single launch. The prop was perfect, previously.

So beware at Portage and beware at other locations, as well. I doubt the marina can or will do anything the rest of this season. Normally, water levels in the Great Lakes drop over the winter so be doubly aware in the spring. And if you sneak in a “power-load” after hours for convenience, cut it out.

Posted by Captain Mike at 7:27 AM No comments: 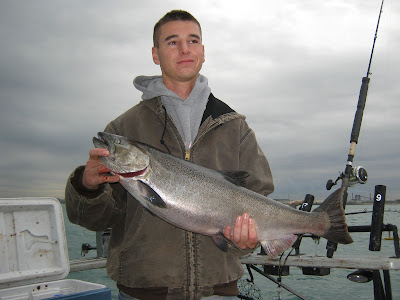 Posted by Captain Mike at 5:01 AM No comments: