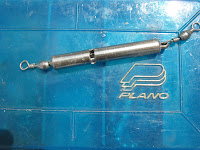 One of the most effective tactics for catching lake trout in Southern Lake Michigan is now one of the least used. Properly called "sinker releases," a more popular term is "tin whistles."

When Jim Van Maas contacted me about a charter, he asked if he could bring some of his "old" gear along, left over from when he used to come to Lake Michigan with friends, fishing out of their own boat. Sure, I said. We can give it a try. When he showed up, last Friday morning, he hadn’t dug deep to resurrect any of his old Tadpollies, but I did! And, I dug out a tin whistle.

At this time of year lake trout swarm up from their customary depths to slurp on gobies just east of the Indiana Shoals. Besides the tin whistle, I dug a bit deeper for a container of one-pound disposable weights and tossed a wire-line rod and reel into the boat–one I usually use for fishing deep with Dipsey Divers in mid-summer.

The whistle has a line tie on each end. One end connects to the wire line, to the other end tie a monofilament leader. A snapswivel goes on the other end of the leader and is used to attach a likely-looking spoon. A special clip is located along the barrel of the whistle to which you attach a 3-foot length of mono with a one-pounder tied to the other end.

The rear line-tie to which the leader attaches is spring loaded. The weight of the lure pulling along won’t compress the spring, but the weight of a laker will. When the fish bites, compressing the spring, it opens the clip in the barrel of the whistle, the sinker drops off and you get to fight the fish without a heavy weight on the line. 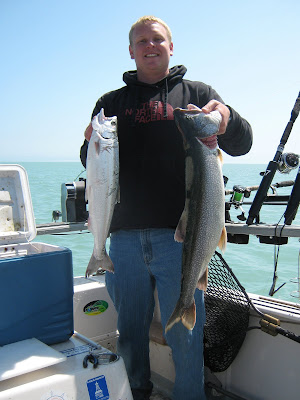 Out on the shoals, it didn’t take long for the tin whistle rig to connect. I don’t know if it was a "memory trip" for Van Maas, but it sure was for me.
Posted by Captain Mike at 2:42 PM No comments: 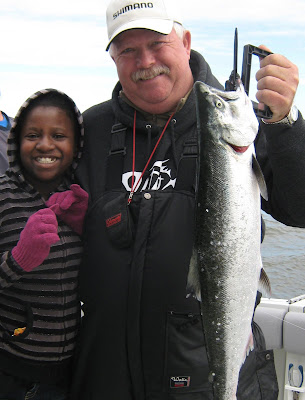 Posted by Captain Mike at 8:13 AM No comments: 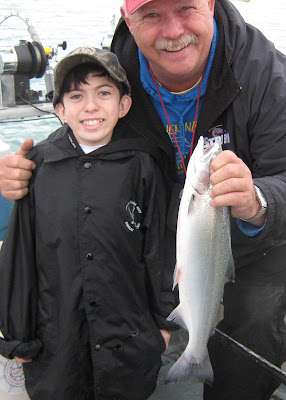 "Okay, guys," I said. "When a fish bites you need to yell, ‘FISH-On’ as loud as you can, okay?" Both Joey and Luke shook their head. "Loud," I said. "So loud they can here you in that boat way over there. Okay?"

Less than a minute later one of the planer lines snapped free from its release and the rod folded over. I don’t know whether Joey or Luke helped, but in that boat way over there, I’m sure heads turned when they heard my own "fish-on" call.

I handed Joey the rod and he just held on. "Turn the crank," I coached. He’d never held a fishing rod before. I guess I should have coached a bit more in depth. Once he started cranking, Joey was fine and when we netted the coho and flipped it onto the deck, his smile went ear to ear! 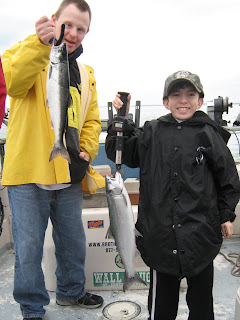 Seconds later another coho struck a crankbait on the other side of the boat and Luke was onto his first salmon.

Each year Indiana’s North Coast Charter Association conducts a "Special Kids Gone Fishing" outing, where we take area youngsters with chronic or debilitating problems or disease for a morning on the lake. I’ll admit, it makes me feel like a special captain, as well.

At the photo session at the end of the trip, I think all the kids but one held up their hand when asked if they’d caught a fish. When they were asked if they had fun, I think heads turned in a boat "way over there" to see what the cheering was about. 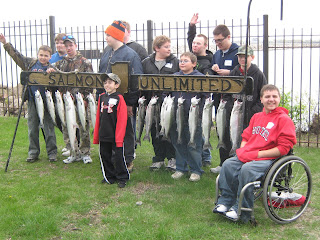