LADIES DAYS (and others)!

It’s been an interesting 4 days. It’s not common in late March or early April to have the opportunity to fish 4 days in a row. I don’t usually get that many bookings and when I do, the weatherman doesn’t cooperate enough to allow it.

On Wednesday, I fished Abby Seitzinger (seven years old) who brought along her dad and uncle to do the driving. She was the fisher-person! We fished out of East Chicago, specifically at the Indiana Harbor Ship Canal. I don’t remember Abby losing any fish, but her "drivers" did. Still, the cohos were cooperative and she coached them on to their limits.

Thursday, I hosted a trio of Michiganders who headed "south" to get some fresh fish to eat. You can

see from the photo, they got their wish, with several bags of coho filets to keep them in meat until "spring" moves north to their normal fishing lakes.

Friday was a group from Kansas who drove 500 miles to catch some fish. They were joined by one Indiana friend. We had a great time. The fish mysteriously vacated the ship canal, but we located them offshore of the U.S. Steel Gary Works a few miles away and ended up with 15 beauties in the cooler before the rains showed up.

Finally, on Saturday, a long awaited "family reunion" sort of trip. A couple of years ag 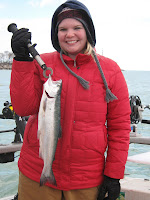 o my brother and his wife set up a "gift certificate" to their son and his new wife of a Lake Michigan Fishing Trip on the Brother Nature. By spring, Carrie was with child and in no morning mood to fish. By the following spring they were well into child care activities to plan a trip so this year, Grandma babysat while Grampa, Justin and Carrie came to fish. We found the fish right outside the marina and slowly picked away to a catch which included the first steelhead of the year, as well as limits of cohos. Carrie caught the first, last, biggest and several fish in the middle.