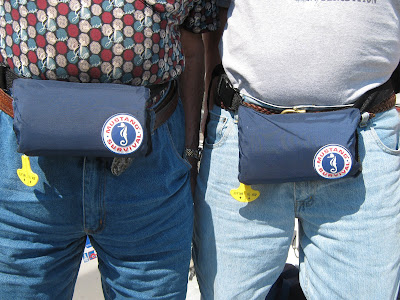 I’ll be the first to admit to not being "religious" when it comes to wearing a life jacket. I’ve never been in a situation where I had to put one on due to an emergency. I’ve worn them due to legal requirements, such as when water skiing, or when it seemed a good idea, such as in a kayak. I’ve worn them at the request of the captain of the boat–their personal safety rule while underway–usually guys with high-speed bass boats. I’ve got plenty of life jackets on my boat. They are big, clunky Type I styles adorned with reflective tape, luminescent lights and whistles. Forget stylish and they are about as comfortable as a body cast. Required by law, they’ll do the job if ever needed.
The way my boat is set up, it’s almost impossible to fall out. Most of my boating is in the daytime. I was never overly-concerned except in late summer when we start fishing long before dawn. In the dark, you can’t see the waves, you can’t see wakes from passing boats, you can’t see any floating objects in the water ahead, it’s tough enough to see the other boats around you and judge the direction and distance to them.
Murphey’s Law says if something can happen, it will happen--and I can imagine situations requiring a life jackets being more likely in the dark than in the day. Much about life jackets are simple common sense so I let common sense prevail.
This year, when the pre-dawn bite got underway, I put another bundle of life jackets on my boat and asked all on board to use them. No one has objected. It never took more than a few seconds to get them on and adjusted.
I did have to remind a few people to take them off at the end of the trip. They weren’t trying to steal them. They’d just forgotten they were wearing them.
My fishing partners were all wearing Type V PFDs which are the inflatable kind. Uninflated, they are a simple belt and fanny pack. Once activated, they balloon into an "over the head" configuration with all the flotation of a Type 1.
There are several brands and models from which to choose. These, from Mustand Survival are terrific! After all, it's plain common sense.
Posted by Captain Mike at 12:48 PM