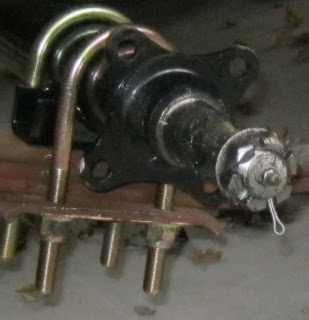 Somehow, a tiny bit each year over the last 12 years that I've owned Brother Nature and its trailer, the rear axle on the trailer became bent to the new tire I put on the trailer last spring was worn out by late August. I bought a new tire and made the last few trips of the year in September.
Once the boat was winterized, I put the boat and trailer on jack stands, removed the tires then removed the 4 U-bolts that fasten the axle to the trailer.

The new axle is in position, held tight by Jeep bolts and ready for the bearing hub and wheel.

Sidebar, here. Some of the nuts on the U-bolts came free quite easily, others had to be wrenched free the entire length of the threads. Dreading having to replacing the tight nuts when reassembling, I took the U-bolts to a friend who had a tap and die set. Running a tap through the nuts and a die down the bolt threads usually shapes them up like new.

This was when I learned there was a 3rd configuration of bolt threads used on U.S. bolts. Most standard (not metric) bolts are NC (National Course). Many hardened bolts used in heavy duty applications are fitted with NF (National Fine) threads. I ran the fine threaded die down the threads on one of the U-bolts.

When done, I noticed a large number of filings came off the bolt. “Wow!” I thought. “That’s unusual.” No, that’s what happens when a NF thread bolt gets re-threaded with a NS die.

There is another thread configuration called “National Special” and that’s the die I used to ruin the U-bolt. The die set had been passed down to my friend from his machinist father. Evidently, machinists have a need for “special” threaded bolts.

So off to the NAPA store. I showed them a U-bolt, no match. Ditto at Autozone. How about eBay? Guess what? The axle bolts for an ‘83 Jeep Wrangler are exactly the size I needed for the boat trailer - and only $16 for a set of four.

Back to the axle. I took it to a local blacksmith to see about bending it straight. He sized up the job and decided it could be done, but he questioned if the axle actually started perfectly straight or was built with a camber in it. The axle had a sticker with the manufacturer ’s phone number so I called and asked for someone in the engineering or parts department and was connected with Ross. I explained my project and asked about the camber.

Before Ross answered my question, he suggested, “Why don’t you just buy a new axle?” On the Eagle Trailer website, new axles were listed for $285 each, plus freight. Then Ross said, “We sell that particular axle for $85 and freight from Elkhart, IN to most places in Indiana is about $40.”

I did one better. I bought the axle and the next time my friend, Captain Mark Johnson, came down to Jasper County from his Elkhart home to deer hunt, it was delivered for free. The new axle is on, held firmly by the Jeep bolts. I’ll have a new tire on it in the spring and be ready to fish.
Posted by Captain Mike at 6:17 AM