I sent Doug Wheelock an email that said this. “Doug: There is some good news in the forecast. In checking the intimate details, the UV Index while you are to be here is to stay near-zero. That will certainly save on sunscreen costs! Looking forward to your visit! Capt. Mike.”


Doug Wheelock is the leader of a loose collection of  friends, relatives and in-laws from or living near Sioux City, Iowa who trek to Indiana every spring for three days of fishing. I call it the Iowegian Attack! 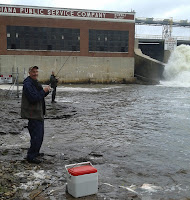 Foul weather has been a frequent participant dating back to the first ever Iowegian Attack, many years ago. I called Doug and told him the weather report was bad - make that horrible - and not the sort of day many would find enjoyable. I suggest we cancel or “reschedule.”

They came and we did make the best of it. I don’t remember the details, but I’m sure we were cold, plenty bounced around - and we caught some salmon.

The Iowgian Attack has taken place in late March, usually in April and once in May. One arrival day coincided with 10-inches of snow and we had to pull the boat with Doug’s 4WD Suburban rather than my then, two-wheel-drive tow vehicle.

We’ve only stayed off Lake Michigan a few times for safety reasons. Day one forecast this year was for north wind and 20-foot waves.  I used my Captain’s prerogative and cancelled the first scheduled day on Lake Michigan. As an alternative, however, we drove to Monticello, IN to fish the Tippecanoe River below Norway dam. When we arrived the water was gushing through the dam because of the heavy rains. I doubted the fishing would be good. Maybe we could give up early and not fish in the rain all day?

No such luck! A few casts and the first of many white bass bit my Roadrunner jig. Doug caught a catfish. We even caught some hybrid stripers! Well, okay, we had some luck after all, we just had to endure the rain and drizzle to prevail.

On Thursday only three boats left the harbor at East Chicago, me with the Iowegian crew and two other charter boats. After the storm, we suspected tough fishing and agreed to split up in search of fish. If anyone found a concentrated number, we'd each other know. One of us went north, one west and we headed east. No one found appreciable numbers.

We had our first bite, but lost the fish, at 9AM; then we actually caught a salmon at 10:02! The other boats each had a fish or two as well, but no one had found a hotspot. The skies lightened a bit and more fish started finding our lures. In the next couple of hours, 17 fish were dragged close enough to scoop aboard before we called the day over and successful.

It was snowing on Saturday morning as we suited up in our foul-weather gear. Not the pretty flakes you’d like to see on Christmas Eve. The tiny, almost pellet-like snow that stings on a hard wind. It stung!