I don’t particularly like invasive species. Many are downright bad for the environment. A few have turned out to be interesting if not welcome additions to the outdoor world. Most are just “there” and either don’t bother much, are a mixed blessing or at least they don’t bother me much.

Not so the  Cercopagis pengoi, other wise known as the fish hook flea.  Often when my lines are clogged with the almost microscopic animals there’s another “F” word used ahead of the name fish hook flea. 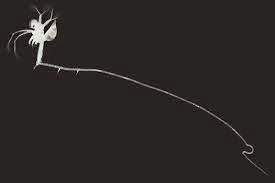 Think of these little zooplanktons as tiny scorpions swimming in the water. As your fishing line drags through the water, especially lines pulled deep by downriggers, their up-turned “scorpion tail,” the fish hook that grows at the end of their tail for which they are named, snags on the fishing line.

Indeed the little invasives from Southwest Asia are tiny. Having one on your line would go completely unnoticed. Having a million of them clinging to a hundred feet of line would hardly be noticed and probably not cause much grief to fishermen. But drag a thin fishing line through the flea-choked waters of Lake Michigan in July and August when the flea-bloom is going full-tilt and it’s not millions or probably even billions of them clinging to a 100 feet of line. It may be trillions.

The fleas can be manually removed, but a good clog may take up to a minute to clean up. Then reel in another 20 or 30 feet, then stop and start flea-picking again. As I said, its annoying at best, and frustrating when there’s a salmon or trout on the line, hopefully hooked good enough that it’s not going to lose the hook while you are messing with the FHF.

There are solutions. They aren’t good, but it sure beats putting up with the fleas. Some guys swear by Cortland Line's Flea Flicker Line and I've no doubt it works. It’s a flat line instead of round. Usually, having a bit of a twist in the line isn’t a good thing. With the Flea Flicker line, it won’t work without having some twist in it. If a flea hits the flat side, it bounces off. If it hits the narrow edge, they will hook on, but the water pressure on them as they are towed along by the line causes them to slide down the line and when they rotate around the twisted line they just unhook and float away.

Just as effective (and less expensive) for me is to switch to heavier line.  Usually, spooling a top-shot of 30# mono on the 'rigger rods does the trick. The line is thick enough the "hook" on the flea-tails won't grab on. Last year, the fleas must have been larger and I had to move to #40.


I only spool 150 feet on each reel so a quarter pound spool will easily do all my ‘rigger reels for a couple years. That length will easily go from the rod tip to the downrigger release at the depths I commonly run my lures.

Connect the heavy line to the lighter line with a double uni knot (go to www.netknots.com).  I add a 20# fluorocarbon leader to any of the lines which will be pulling spoons, again with a double uni. If I'm using a dodger or flasher, I just tie direct.

The downside to this is the increased water resistance of the thick line pulling through the water increases the sway-back of downrigger weights. With braid, I can hit the bottom in 100 feet of water by letting out around 110 feet of downrigger wire. When using 30# mono, it will easily take 130 feet or more, depending on how fast I’m trolling.

It’s not as much fun to catch a fish on long lengths of stretch mono, either. The choice are pick fleas or catch fish. I’ll go with catching the fish.
Posted by Captain Mike at 7:23 AM