STEVE AND BOB GO TO SCHOOL 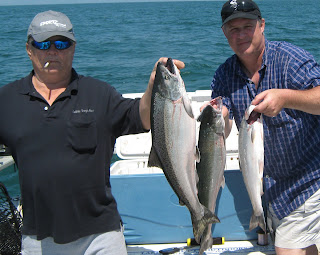 There’s a new generation of Great Lakes anglers coming along. I monitor a couple of Internet sites that host discussion groups and hardly a week goes by that some newcomer doesn’t post a question asking basic information about some aspect of the sport. What’s a slider? Where’s the gong? How do you get to a specific marina? You see them at the lake, as well.

They have a recently commissioned boat, some gear and enthusiasm. I was one of them long ago and I did it the hard way–all trial and error.

Luckily, much of my gear was home made and I could make it, try it, then come home and remake it or alter it to make it better.

That’s why, when a newby posts on one of the sites, I suggest they hire me for a charter one day and I’ll take them fishing while they go to school.

Steve and Bob did just that recently. Steve has a smaller boat and Bob a 19-footer with some of the gear they need to fish Lake Michigan. So we headed out, I set lines and then instead of just letting our conversation drift to whatever popped to mind, I went over the equipment I use.

We covered rod holders, their location and other details. We covered electronics, rods, reels, lead core and copper wire. Colored line, clear line, wire line, divers, nets, places to go, when to go, how to go.....Oh, and we caught a few fish along the way, as well.

Money well spent? They thought so! I think so too. It probably cut 3 or 4 years off their learning curve and saved them from making some costly mistakes. Want to go to school? Give me a call–and we’ll catch a few fish, as well!
Posted by Captain Mike at 5:43 AM