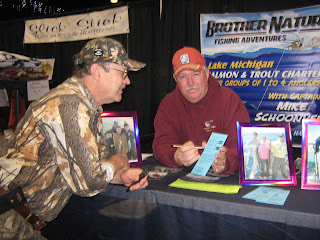 This weekend, March 11 and 12, I’ll be at the Hammond, Indiana Cabela’s Store for their Captain’s Weekend.  Stop by my little display for a visit. We’ll talk fishing, hunting, old age pains or who know what. Hey, if you want to book a charter fishing trip, I’ll be glad to do that, as well.
Posted by Captain Mike at 7:11 AM