Sometimes lake trout are the only game in town on this end of Lake Michigan. Though some people disdain the “great gray trout,” I don't mind them at all. One of my boyhood dreams was to make an excursion to some far-off destination where I could tangle with lunker lakers. Now, I can do it in my own back yard. I accept a laker isn't a salmon and love ‘em for what they are. 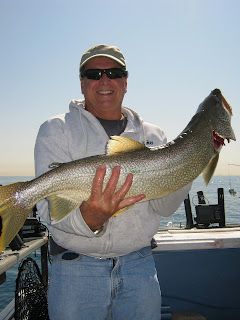 Though lakers readily bite spoons, plugs, flies and other sorts of baits, few baits can outfish a simple winged spinner body such as a Spin-N-Glow or Mepps Prop run behind a dodger. A few years ago I started substituting a small trolling fly instead of the beads and bare hook behind the spinner body and for me, the bit of mylar improved the presentation's overall performance.

Then one day, caught off guard with a paucity of laker lures on board, the trout bite got so hot, they demolished the flies and left me with only a bare hook dangling behind my Spin-N-Glow. I had some Berkley Gulp minnows on board, however - small, 2 1/2-inchers left-overs from a recent perch fishing outing.

"What the heck," I thought as I skewered one of the plastic minnow bodies on the bare hook. The minnow gave a bit of bulk to the rear of the spin-n-glow and I've had good luck on many species of fish using Gulp.

One of the things the Berkley scientists who invented their Gulp products engineered into it was an ability to leave a scent trail as the bait is pulled through the water. Did it work? 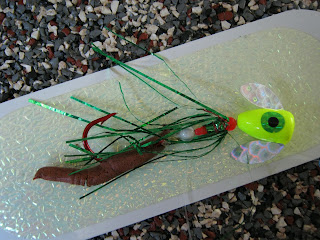 In spades! The rod with the beat up lure and the Gulp minnow trailer, ended up getting the lion's share of the action the rest of that day; and since then, Gulp rigs have continued to work great.

The 2 1/2-inch shad minnows continue to work, but the new garlic flavored pinched nightcrawler segments are giving the laker lovers on my boat a hardy work out this year.