I wish I could remember why I invented the stupid white spoon. I would imagine someone called me on the radio one day and told me they were “killing” the fish on a white spoon with black dots. I must have believed them.
Most Lake Michigan trolling spoons are bright, shiny, gaudy things. Many of them glow-in-the-dark. The patterns painted on them rival anything Picasso could have envisioned - or Timothy Leery while experimenting with LSD. A white spoon with nine black dots was, well, stupid. 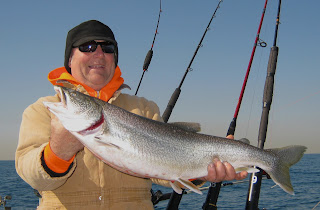 Buoyed by success, I made a couple more (for spares) and handed one to Capt. Doug Iliff to use on his boat one morning. Later, out on the lake the spoon got it’s official name. Doug called me on the radio and told me he’d just caught his biggest fish of the day on that Stupid White Spoon. The name stuck.
Kings, cohos, steelhead - it works for all of them. Lakers love ‘em. So do I. Of course, I’d like any lure that is as reliable as the Stupid White Spoon.